The COVID discussions have really been wearing on my mind. That's why I've been writing those long, convoluted posts every now and then. And that is a big reason why I decided to ask for a change in my MOL name to just be my real name.

So, a bit more about me. My first education was in medicine that took me from pharmacy school to graduate work in the basic science of pharmacology. After my doctorate, I went back to Boston as a postdoc at my alma mater, Northeastern University. I even got to teach some lectures in courses I'd taken some 10 years earlier.

It was there while I was researching developmental events leading to the onset of schizophrenia that I had a revelation. When I got my Ph.D., it was perhaps one of the most humbling moments of my life. I was now out from under the protective guidance of a professor as my thesis advisor and it was time to show I could actually do the work of a scientist in a more independent setting. My revelation was the bitter realization that while I was smart and knew a lot about pharmacological medicine, I needed to be better at the research necessary to come up with new and proven knowledge. After 2 years I decided that I should stop wasting my boss' time and let him hire a better scientist. I could teach but the tenure track was just not in my future since I wasn't as good a researcher as you need to be. Whatever grant money I might get would be better given to better talent. The same would apply to work in the pharma industry and I was already disenchanted with that whole mess and the dominance of monetary gain rather than helping humanity as the motivation for producing medicine.

One thing I was really good at was collecting data and doing the stats and coming up with ways of presenting and displaying it. I taught undergrad and grad students how to do that stuff and that was the late 90s, just when computing power was maturing. Windows 3.1, those were the days. Remember CricketGraph on a Mac? Anyway, I decided to go into medical software. I taught myself basic C++ and took some client/server & database programming and got some good jobs as a QA analyst in medical software. Hey, it was the 90s and the joke was that all you needed to do was make mist on a mirror during your job interview and you'd get hired in the burgeoning tech/internet industry.

In those 10 years between '95 and '05, I was unfathomably lucky to see that Ms. bikefixed had become a valued HR worker at the Saks 5th Avenue in Boston. They promoted her to a regional position and that moved us out to Chicago for just under 2 years. in 2007, they decided to make her the person heading up the HR for all the Saks Off 5th stores and moved her here to work in their Manhattan offices. I was the person who did the "fixing up" stuff around the house to sell it and then find the new one and handle the moving while she was already in the new locale in temporary housing. With all those short-term jobs on my resume with noticeable gaps between jobs, it was pretty clear I was best suited to accepting life as her cabana boy. Sweet.

When she decided to take the promotion, we talked about all the different areas where people who worked in the city actually lived. There was Long Island, Connecticut, non-NYC New York, New Jersey. Lots of places to check out. Ms bikefixed said, "We can live pretty much anywhere you want, as long as it's Maplewood or Millburn." Heh heh. She'd grown up here and graduated from Millburn HS in '84. She rode the veritable pipeline out to Ann Arbor and we met at the University of Michigan in 1987. She sang in the church choir. I thought she was really pretty and had an even prettier voice. Still is and still does, actually. When she was working at the Campus Inn on State Street, she always got a kick out of talking to the New Jersey parents shepherding their fledglings off to college.

I myself had grown up in the metro-Syracuse area, where it was practically in the public school curriculum starting in kindergarten that Jersey was just about the worst possible place in the whole country. Ms. bikefixed had done away with any Jersey accent she may have had so how was I to know what truly lurked behind those luminous emerald eyes? I had no idea what awaited me here.

Jul 31, 2021 at 2:39pm
Discussion: The Uncaged Bird - We birders are sighting some amazing birds this Summer.

I've watched Hummingbirds chasing each other. Busiest summer yet. 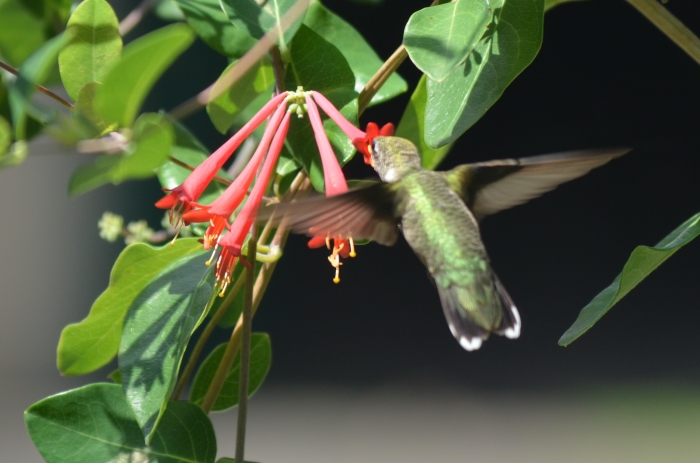 In the good, old USA everything is politics.

I was born  in Brooklyn during the Great Depression, and my family was poor, but my Mom had a deep tub sink and washboard, and then a wringer-washer, so, comparatively speaking, we had it good!

“Life won’t be the same” but, in this country, we do believe, “the sun will come out tomorrow” and life will get better. Socialism is not the solution here.

No, it’s really not all about politics.

Homespun tales like these have nothing to do with being responsible about public health, nor socialism.

Try again, and be honest this time, rather than glib.

After all, Covid is serious, isn’t it? You’ve had friends and family who have died, right? You’ve been vaccinated because it is serious, and important, right?

if we're going to tell homespun tales of our youth, I have one.  I vividly remember as a small boy standing in line with hundreds of other kids at the Frank K. Hehnley elementary school, waiting to get a little cup with a sugar cube, which contained a drop of the polio vaccine.

a generation ago, people in our country knew that it would take collective action from all families to eliminate a serious virus.  And the U.S. has been free of polio since 1979.

What a great story.    I really like your input and graphs on covid and they help us better understand this pandemic.   Please keep posting.

Still, as much as I enjoy the early internet message forum vibe, this past year has made me aware that I could stand to see more people IRL, and I've been pondering sending out a post along the lines of "I'll be at [some bar] on [some date] after work, if anyone wants to show up". I'm not yet 100% I actually want to do that -- people aren't necessarily the same IRL as online, for better and worse -- but OTOH nothing ventured nothing gained?

We used to have regular IRL or F2F gatherings. Those were a hoot.

:)) :)) :))  (from a non-socialist nation in which all vaccinations and most doctors’ visits are bulk-billed ie free)

Rising star of the GOP engaging in self-parody.

Oh, and I’m still only paying $6.50 for my cancer meds and nothing for my specialists’ visits. That’s what the Medicare Levy in our annual income tax is all about.

We could call New Jersey "The Pharma State."

But I prefer The Garden State.

"Food and agriculture are New Jersey's third largest industry, behind pharmaceuticals and tourism, bringing in billions of dollars in revenue to the state.

In 2017, the state's more than 9,000 farms generated cash receipts of more than $1 billion. The nursery/greenhouse/sod industry remained the leading commodity group, followed by fruits and vegetables, field crops, equine, poultry and eggs and dairy.

Retaining productive, taxpaying farmland is critically important to all New Jersey residents since agriculture is the largest single source of the scenic vistas we all enjoy throughout the year. Productive farmland covers nearly 720,000 acres.

Farmers in the Garden State produce more than 100 different kinds of fruits and vegetables for consumers to enjoy either fresh or processed here in New Jersey and elsewhere in the Northeast, in Canada and in many countries around the world. Nationally, New Jersey is one of the top 10 producers of blueberries, cranberries, peaches, tomatoes, bell peppers, eggplant, cucumbers, apples, spinach, squash, and asparagus.

In addition, growers also produced hundreds of thousands of dollars worth of specialty crops that added a unique flavor to the Garden State’s bounty. Vineyards, for example, are a growing segment of the industry, enabling the state’s 50 vintners to develop a wide variety of award-winning New Jersey wines.

Fish and seafood are also a valuable commodity with tons of bluefish, tilefish, flounder, hake, shellfish and other species harvested annually. With its catch sold here at home and in foreign markets around the world, the commercial fishing industry adds another $133 million to the value of agriculture in New Jersey."

My username is my real initials.  I think most people who care either know me or have figured out who I am.  When I started posting here I had kids in the schools and mostly didn't want to embarrass them.  But after all this time, I'm not sure I want to change it.

I've been The Soulful Mr T for so long I've forgotten my real name.