Industrial toxins are an inescapable part of the history of the industrial state of New Jersey, and played a role in our very local history. In recent decades, New Jersey has been home to over 140 EPA-administered Superfund cleanup sites. Protection for workers and compensation for those suffering and sometimes dying from industrial exposures have been relatively recent developments.

Historically, three New Jersey industrial toxins – mercury, radium, and asbestos – have their own harrowing stories to tell. The hatting industry, which thrived in dozens of small shops in Essex County including in Orange, South Orange, and Millburn in the latter decades of the nineteenth century, exposed workers to toxic mercury fumes, causing mental and physical disabilities. In the interwar years, dozens of radium dial painters at a factory in Orange – all young women – suffered and died from radiation-induced bone cancer and bone degeneration. At mid-century, workers at Manville, the “asbestos city,” fell ill with damaged lungs and a rare tumor called mesothelioma, as did workers who installed the insulation products produced at the Manville plant.

On Sunday, October 21, at 2pm at Durand-Hedden House in Maplewood (house and store open from 1 to 4pm), speaker Dr. Sandra Moss will tell this gripping story in an illustrated talk. Audience input and observations are welcome. Dr. Moss is a retired internist who talks lectures and writes about the history of medicine in New Jersey. She is past president of the Medical History Society of New Jersey and of the American Osler Society (a national organization for historians of medicine.) An author of numerous articles, chapters, and reviews, she has also written three books about New Jersey’s medical history.

Durand-Hedden’s charming Country Store will open for the season at this event. Check out historic-themed treasures such as early American games, books, and toys; facsimile documents; quill pens and ink; historic cookbooks; cookie molds; tin lanterns; and reproductive decorative items and ceramics. You’ll also discover the hard-to-find original Doors of Maplewood poster, Smile: A Pictorial History of Olympic Park 1887-1965, and the new acid-free reproduction of the 1931 Map of Maplewood.

Durand-Hedden House is dedicated to telling the social and natural history of the development of Maplewood and the surrounding area in new and engaging ways. It is located in Grasmere Park at 523 Ridgewood Road in Maplewood. For more information or to arrange group tours call 973-763-7712. You can also visit our website at durandhedden.org and find us on Facebook and Twitter. 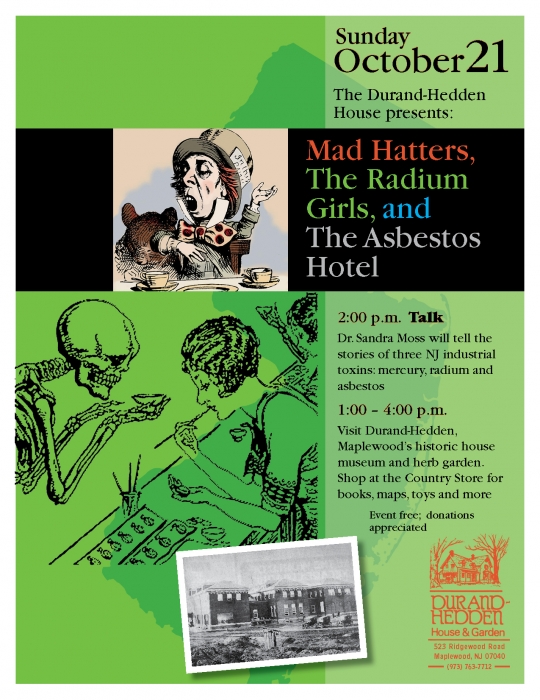 from Bob Roe:  This is interesting and tragic history.  All public health workers learn these stories.  I had to get radon dirt from the Orange Radium watch factory that was in my back yard dug up and removed by the EPA.   They checked my home multiple ways for radiation afterwards and at least I know that there is now no elevated radiation in my house.

A chemical plating factory in Maplewood was closed about 25 years ago.  This is the lot next to the Public Works driveway and it is still being tested for ground water contamination.   The heros of this story to my way of thinking are the Joint Meeting (sewage) inspectors who caught the operators of the factory deliberately dumping dangerous chemicals into the storm water drains.  The factory was immediately closed and the EPA began cleanup two days later under the Superfund funds.  Criminal charges were filed, but the owner got no jail time.

from Bob Roe again:  The waste being dumped into the storm sewer consisted of copper cyanide, silver cyanide, and sodium cyanide and acid waste.   Its been a long since I took chemistry, but I think if you mix acids with cyanide salts that you get cyanide gas.  This could have been a disaster much like the Dopal(?sp) disaster in India.  Thanks to some diligent Joint Meeting inspectors, this disaster was avoided.

from Bob Roe again:  One point is that these chemical disasters are still a good possibility.  The news recently from Arkansas is that there is a type of herbicide that only does not kills soybean grown from certain type.   This herbicide is used to kill weeds.  But if you did not buy the right kind of soybean seed  or grew some other crop, then the drift from this pesticide would kill your crop.   Arkansas tried to ban this herbicide, but some farmers still use it so they can make money.  This is scary stuff.

Return to all Discussions
Return to Lost and Found