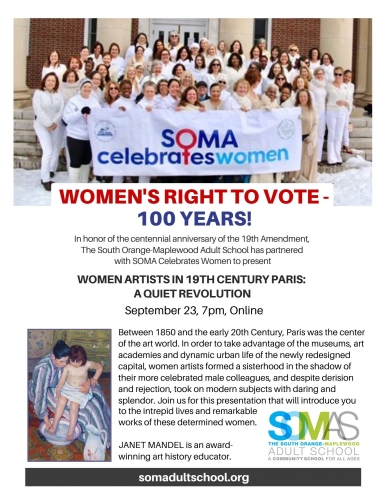 In honor of the centennial anniversary of the 19th Amendment, SOMAS has partnered with SOMA Celebrates Women to present this special lecture. Between 1850 and the early 20th Century, Paris was the center of the art world. In order to take advantage of the museums, art academies, and dynamic urban life of the newly redesigned capital, women artists from the United States and other countries in Europe arrived to join their French counterparts. They formed a sisterhood in the shadow of their more celebrated male colleagues, and despite derision and rejection, took on modern subjects with daring and splendor. By the turn of the century many of these women, avant-garde in their aesthetic sensibilities, became a formidable network in the fight for women’s suffrage. Join us for this presentation that will introduce you to the intrepid lives and remarkable works of these determined women. JANET MANDEL is an award-winning art history educator.