I a moving out of my house on Audley Street and I can across this inscription on a foundation patch in the back of my garage. It had been covered with debris since before we moved in.

I don’t know who Tony and Mickie were but I wish them all the best. 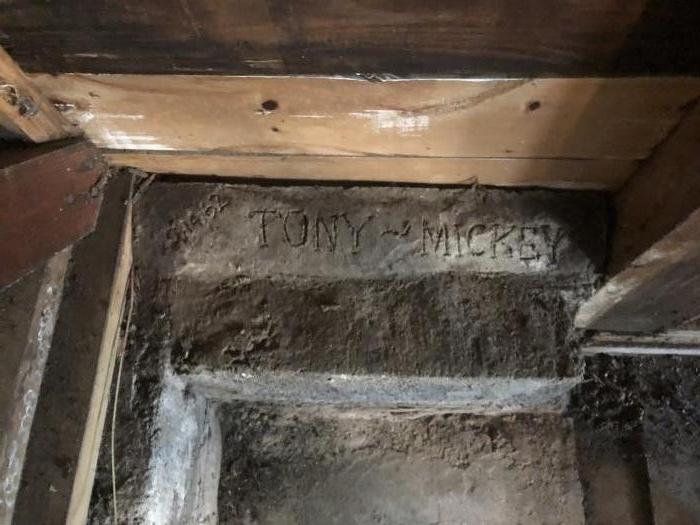 Someone signed and dated the bottom of our basement stairs (the back of one of the risers).  Not as elegant as Tony & Mickey's inscription though.

In another house, the bottom of one of the wooden kitchen drawers had swatches of (original?) paint colors for the rooms of the house.  Some were a little alarming.  I love finding this stuff.

All best to Tony and Mickey, and to GoSlugs too.

Anthony J. Cavallo, of Denver, PA, formerly of New Providence, NJ, passed away peacefully surrounded by his family on October 8th in Pennsylvania. Relatives and friends are invited to attend the Funeral Mass at Our Lady Of Peace Church, 111 South St., New Providence, NJ on Fri, Oct. 14th, at 10:00 AM. Interment Holy Cross Cemetery, N. Arlington, NJ. Visitation will be held at The Jacob A. Holle Funeral Home, 2122 Millburn Ave., Maplewood, NJ on Thursday, 2-4 & 7-9 PM. For more information or to send condolences, please visit jacobhollefuneralhome.com

Anthony was a 1941 graduate of Columbia High School in South Orange, NJ. In 1942, Tony enlisted in the United States Navy where he served during World War II in Naval Aviation as a First Class Chief Petty Officer. During his four years in Naval Aviation, Tony served in the South Pacific theatre where he and his crew rescued down pilots. Tony often spoke fondly of his time in the Navy and his experiences during his years of service.

After the war, Tony came home to Maplewood, NJ and in 1948 married Mickey Cavallo with whom he would spend the next 61 years. In 1959, Tony and Mickey moved to New Providence, NJ, where they would spend their lives together until her passing in 2009. After a decade in the printing industry, in 1968, Tony went to work for Arrow Uniform Company in Newark, NJ, where he became the Teamster Shop Steward. In 1995, he retired from Arrow at the age of 73.

Tony was a devoted father to his son Anthony and devoted husband to Mickey. Tony was also an avid New York Giants fan and enjoyed watching them over the years.

Tony is survived by his son, Anthony of Denver, PA, his daughter-in-law, Kathleen, granddaughter, Linnea and grandson, Christopher. Tony is also survived by his nephew, Vincent Cavallo of Amelia Island, Fla. Tony also treasured his good friends and neighbors in New Providence, including Jack & Jane and Eddie and Lydia.

unlikely since they moved to New Providence in 1959, according to obit

vermontgolfer said:
unlikely since they moved to New Providence in 1959, according to obit

Obits often are generalizations.  Additionally, moving does not mean the house was sold at that time.  Food for thought.

I have been searching for such documentation (but have been unsuccessful so far).

vermontgolfer said:
unlikely since they moved to New Providence in 1959, according to obit

I'd think it's a LOT more likely that the obit had the date wrong than that there was another Tony & Mickey in Maplewood in that era.

My house is n South Orange so it would be the date and the town that they got wrong.  Probably not the same couple but it’s an interesting coincidence.

GoSlugs said:
My house is n South Orange so it would be the date and the town that they got wrong.  Probably not the same couple but it’s an interesting coincidence.

Then again, the obit also says CHS is in South Orange. These days, obits are usually submitted by the family, working from memory (rather than being written by a newspaper’s staff and fact-checked), so there’s a chance that more than one detail got mixed up.

Have to wonder if "Mickey" is a nickname for Michael or Mike and if this was purposely hidden as this was back in the day ...