At the Centennial of the WWI Armistice, Sunday, Nov. 18, 1pm to 4pm

One hundred and one years ago, the United States declared war on Germany, joining the First World War, and the impact was felt in the small town of Maplewood, NJ. Join Durand-Hedden on November 18 from 1pm to 4pm as we learn more about the Great War.

Over 100 men from Maplewood were called to fight and eight never made it home. Three saw brutal action in France, two were pilots whose planes went down, and three were victims of the influenza pandemic.  A year later, on November 11, 1918, fighting in World War I came to an end following the signing of an armistice between the Allied powers and Germany, the precursor to the Treaty of Versailles.  The process of returning home then began for the American military, nurses, Red Cross workers, and the many others who had been caught up in the war effort.

At the Durand-Hedden event, visitors can talk with a WWI reenactor portraying a Marine sergeant as he reveals the life of a doughboy and his essential ‘soldier’s kit.’ See the uniform of a soldier from the Imperial German Army and German field medical gear. Meet “Dr. Anna Tjomsland”, the first woman physician to enlist in the US Army medical corps and who oversaw a 130-bed ward in Vichy France at Base Hospital No.1. Hear an authentically attired drum and bugle corps from Early Music and Arts play U.S. military music of the period plus the spirited “Over There,” and meet silent-screen celebrity “Theda Bara” as she speaks about selling war bonds.  Enjoy the early twentieth century diversion of 1917-1918 records played on antique phonographs by The Spring-wound Serenaders. Listen to the reading of World War One-inspired poetry by David Burr, a book editor and poet.

Young visitors can take part in the event by making red paper poppies, which came to symbolize remembrance following the Great War.

An exhibit will explore rediscovered stories of Maplewood’s war casualties as well as the effects of the great Influenza Pandemic of 1918. Stunning posters by American artists designed to promote support for the War and efforts like the Red Cross and the Woman’s Land Army on the home front will be on display. Soon after War’s end, the young suburb of Maplewood began plans to create Memorial Park, named to commemorate all the men and women whose lives were forever altered by the Great War. To honor the eight local men who died, the community planted eight American Elms at the top of the natural amphitheater, marked by a bronze plaque.

Durand-Hedden House is dedicated to telling the history of the development of Maplewood and the surrounding area in new and engaging ways.  It is located in Grasmere Park at 523 Ridgewood Road in Maplewood. For more information or to arrange group tours call 973-763-7712. You can also visit our website at durandhedden.org and find us on Facebook and Twitter. 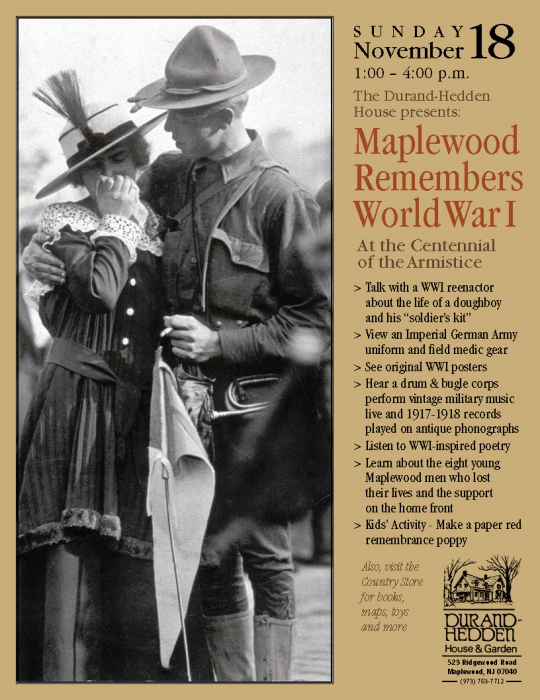 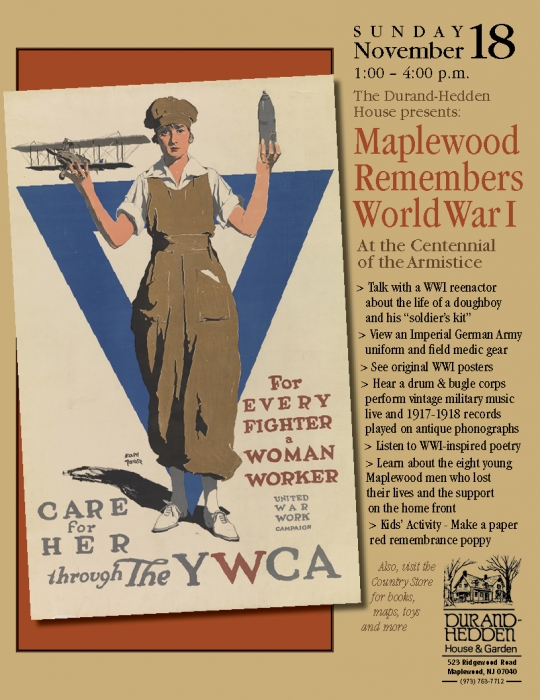 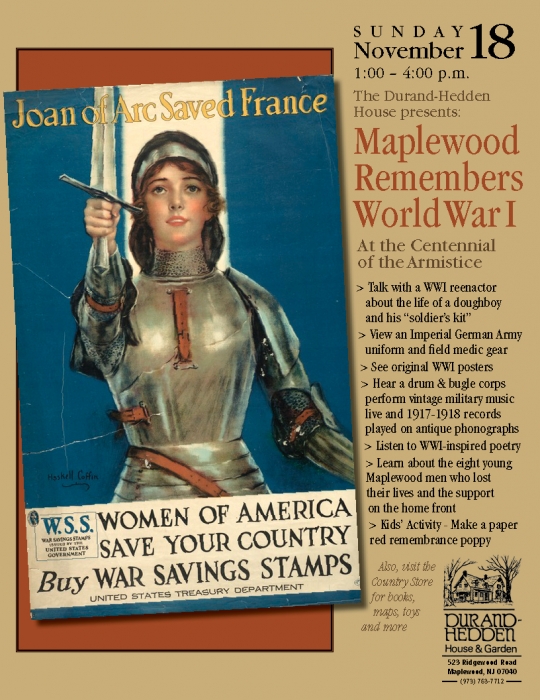 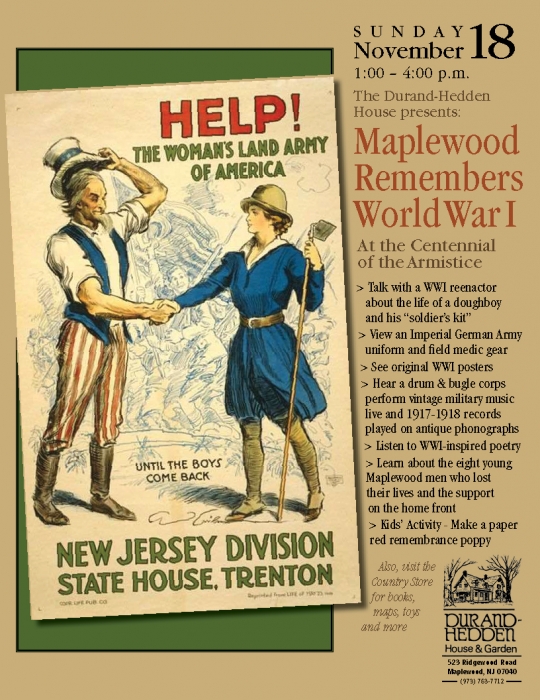 is there a fee?

no. Donations are appreciated, though.