New Jersey has long depended on rivers and reservoirs for much of its drinking water. By 1876 when northern New Jersey, such as the City of Newark, was heavily industrialized and densely populated, the water supply had become a crisis.

Although people had known for centuries that there was a link between pure water and good health, a clear link between contaminated wells and a specific disease outbreak was not demonstrated until London's cholera outbreaks of 1854 and 1857. Louis Pasteur would not publish his own pioneering work, Germ Theory and Its Applications to Medicine and Surgery until 1878. There was at the time, however, a growing body of evidence that illnesses could be caused by “organized and living organic matter.” Many scientists were convinced that water was the medium through which diseases were spread.

In the summer of 1876, a committee of the desperate northern New Jersey mayors asked the State Geologist to help find new water sources. Many cities such as Newark relied on the Passaic River which, by 1874, could not supply potable water anywhere below the city of Paterson. The search for new supplies of pure water was hampered because the germ theory of disease was far from complete and the science of public health was still in its infancy.

The Geological Survey recommended the upper Passaic River basin as the new source of domestic water. Their recommendations lead directly to the construction of reservoirs in northern New Jersey. Today there are 13 major reservoirs in with a combined storage capacity of 76.2 billion gallons.

This fascinating talk “Dirty Rivers and the New Jersey Water Crisis of 1876” on February 23 at 2:00 p.m. by Kevin Olsen, chemist for Montclair University’s Passaic River Institute, focuses on how this decision was made despite an incomplete understanding of water chemistry and only a vague understanding of water-borne bacteria. As an historian, Olsen has published a number of papers related to chemical history and New Jersey’s maritime history. He is the author of A Great Conveniency, Maritime History of the Hackensack River, Passaic River, and Newark Bay.

This is also the final opportunity to see the popular exhibit, Exploring Golf Island. 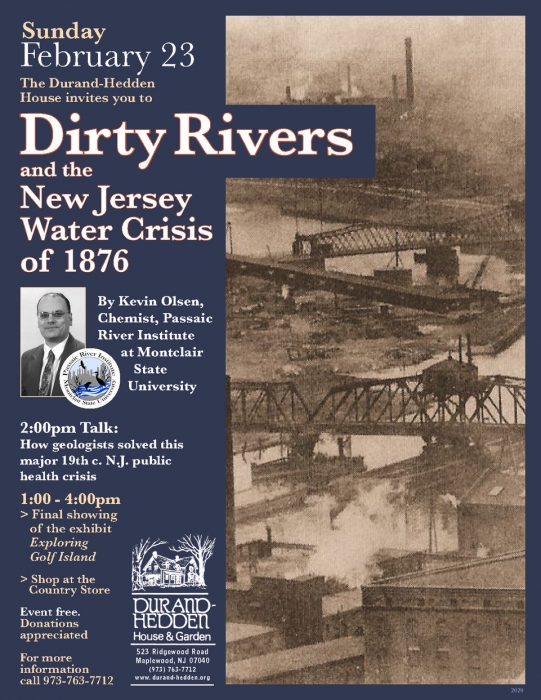