MAPLEWOOD, NJ – March 2018 – In the first half of the 20th century, and in the 1920s especially, tea rooms were enormously popular in small towns, big cities and suburbs. Most were owned or managed by women and provided fashionable places for women to gather. The Tea Room Craze came about as part of the movement for women’s rights and suffrage and is referred to by historians as an example of “Domestic Feminism.” Several tea rooms flourished in this community, including the Washington Inn in Maplewood and Ye Olde Village Inn in South Orange.

On Sunday, March 11, Durand-Hedden will host historic interpreter Maureen O’Connor Leach, who will play the role of a 1925 matron, Maisie Stanton, who sees change and wants to enter the modern age as a tea shop owner. Leach will provide insights into the obstacles faced by women as they stepped out of the home and into the business world.

Maisie’s monologue references primary history sources, and transports the audience back in time through this engaging fictional character. Maisie’s tea frock has been sewn using a period pattern and the character utilizes other historically accurate accessories. Following the 2:00 p.m. presentation, there will be an opportunity for Q & A; tea and cookies will also be served.

The exhibit “Maplewood Remembers World War One” and the Durand-Hedden House will be available for viewing before and after the performance.

The event is free. Donations are appreciated. 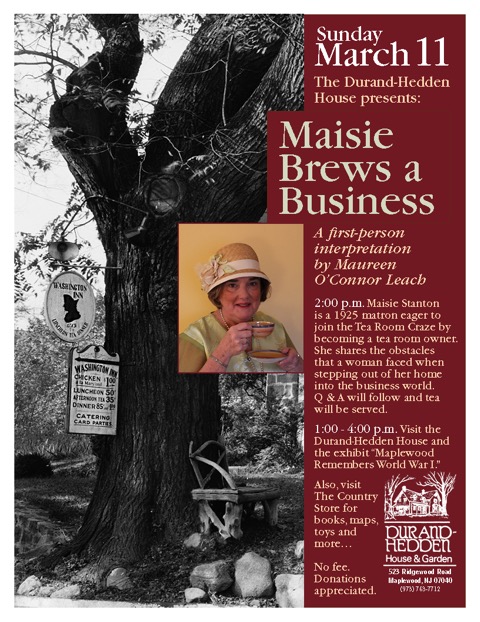