En Garde! The Panto (mis)Adventures of the Three Musketeers

We are MEGA EXCITED for you see our new panto this January...

When Constance Soreau’s brother, Jacques, is arrested by the scheming Cardinal Richelieu and thrown into the Bastille, she enlists the help of her feisty boyfriend D’Artagnan, his trusty snail sidekick Serge, and the 3 Musketeers to help rescue him. The Cardinal wants Jacques’ famous magical perfume to disgrace the Queen and ruin all chances of a peace treaty between France and their rival England.

Can D’Artagnan, the Musketeers and a gang of street urchins rescue Jacques? Will they defeat the Cardinal, cheesy Roquefort and his Red Guards, and the mysterious Milady DeWinter? You’ll find out the answers to these questions and more in En Garde! The Panto (mis)Adventures of the Three Musketeers.

In January 2020, Suburban Legend presents En Garde! The Panto (mis)Adventures of the Three Musketeers -  a family comedy in the British Pantomime tradition written, directed, produced by and starring talented local residents, with profits benefiting local charities. Get ready to boo the villains, cheer for the heroes, shout “It’s behind you!” and join in the fun! Sing along to some catchy silly songs and be ready to laugh at some of the best worst jokes ever told in Maplewood.

Advance tickets are on sale now at njpanto.com. Door Admissions are Adult $25, Child $20. 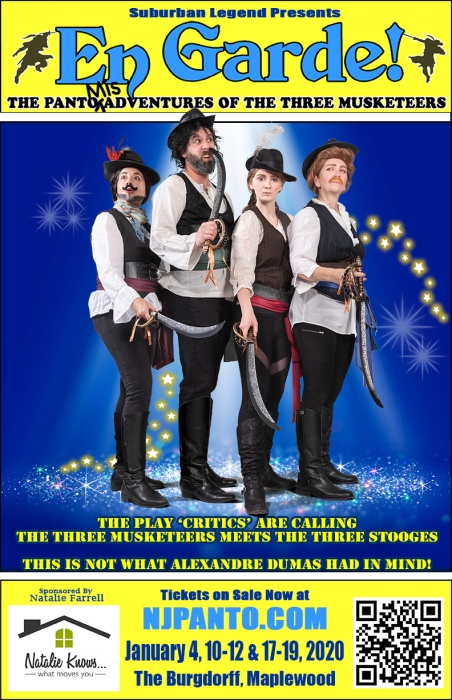 Bump! Advance tickets are selling out quickly! Get in early!

Go to njpanto.com for advance tickets. 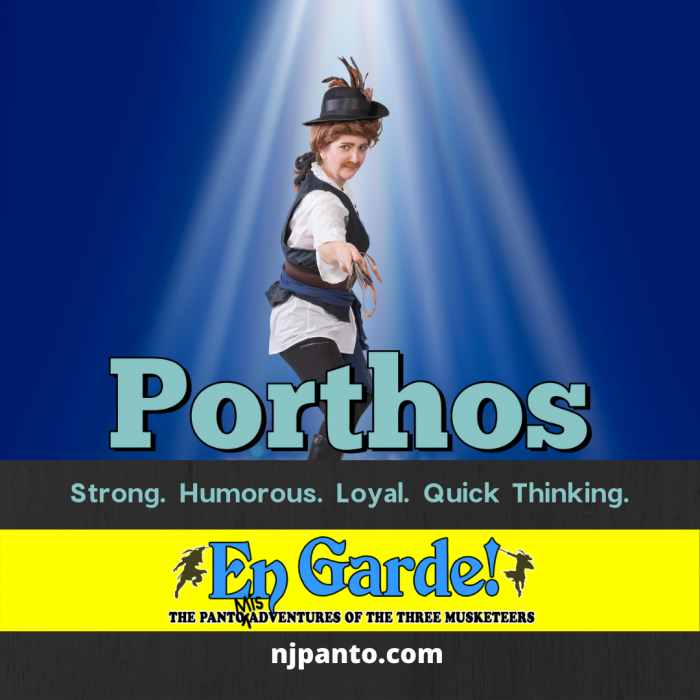 Go to njpanto.com for advance tickets. 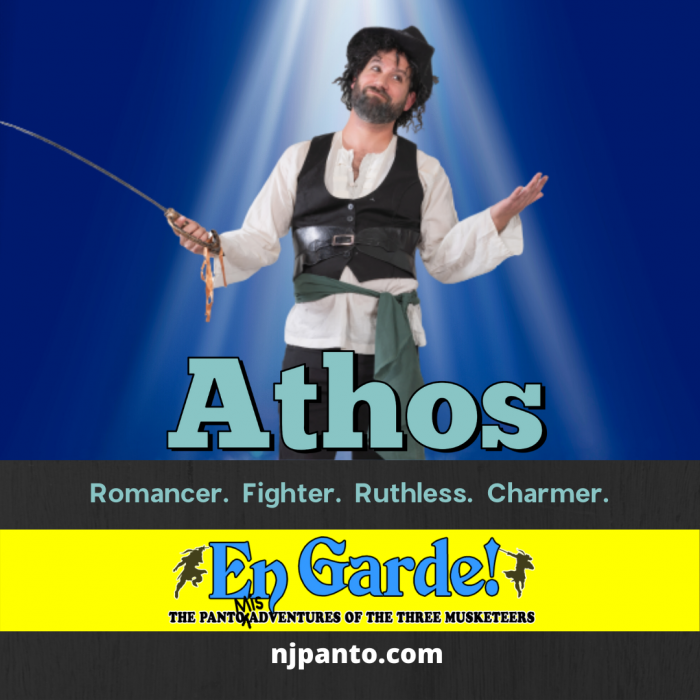 What’s that? You haven’t got your tickets yet? What are waiting for, a sale? Fine! 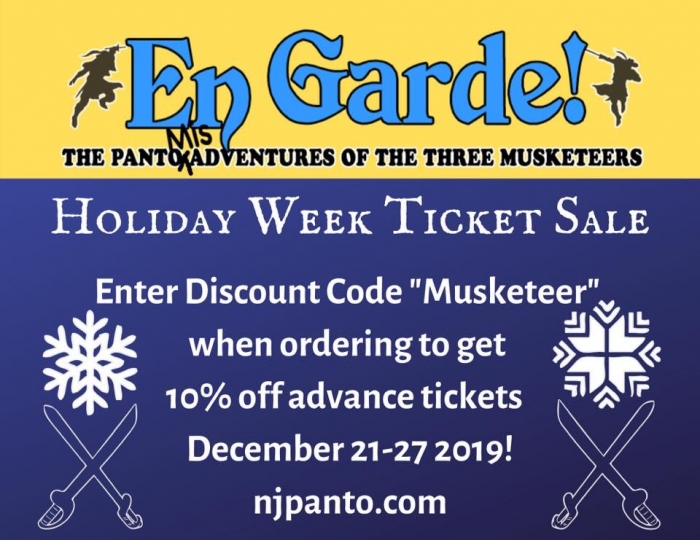 Remember our 10% discount this week! 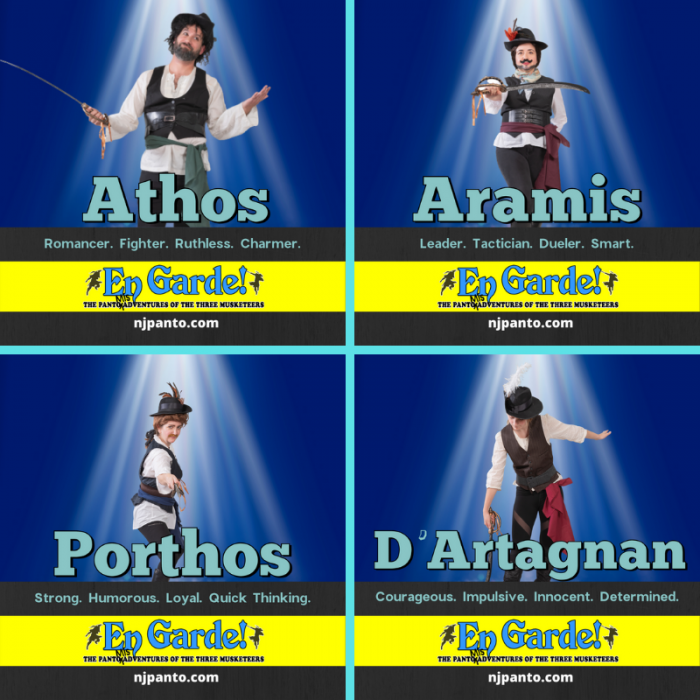 Bonjour, mes amis! Opening night for En Garde! is this Saturday, and we can't wait for you to see our fabulous show!

Tickets at the door are $25 for adults and $20 for kids, but you can avoid those prices by buying in advance at njpanto.com!

Need to know what a panto is? Find out more here! Tl;dr, it's a fun show for all the family, with proceeds benefiting local charity organizations. It's been a Maplewood tradition for the last 8 years!

Advance tickets are on sale now at njpanto.com. Door Admissions are Adult $25, Child $20. 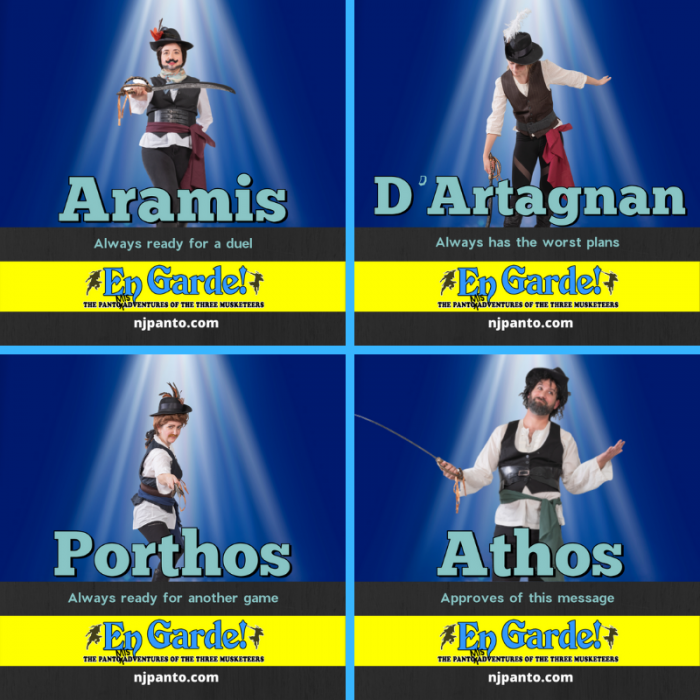 Fun show! I look forward to seeing it again and again....

We’re almost sold out for tonight! Get your advance tickets now - adults $20, children $15.

It’s the best family fun you’ll have in Mapso! 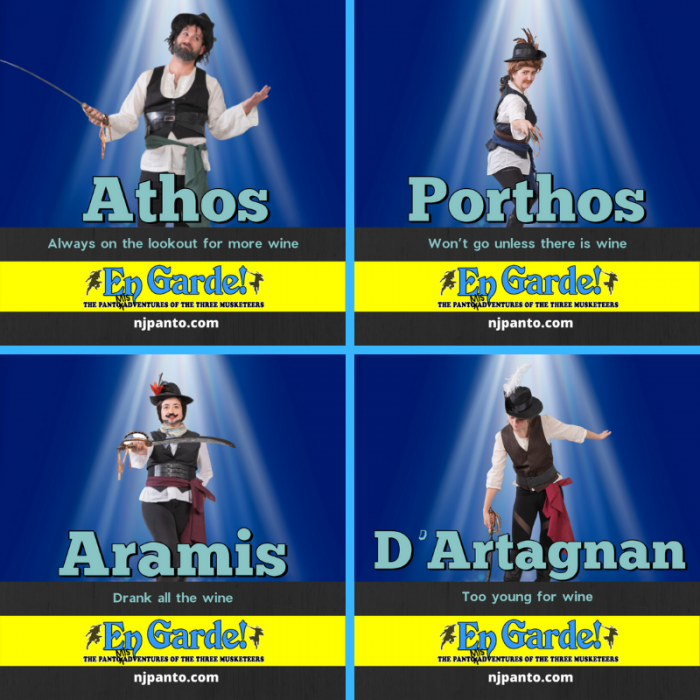 I am not Athos, but I approve of this show.

Thank you to everyone who came out for our premier on Saturday night. What a magical crowd! We sold out and you were loud and pumped up! We couldn't have wished for a better audience.

We have 6 more shows to go starting this Friday. Believe me, you and your family will regret missing this crazy take on the Three Musketeers.

Our Sunday Matinee show is almost sold out already, but do not panic! There are still tickets available for Friday and Saturday night! Doors open at 7pm, show starts at 7.30. Book now to save $5 per ticket.

It was so popular, we're doing it again! Go to njpanto.com, use the discount code SURPRISE and you can get $2 off Adult and Child Advance tickets for Friday and Saturday performances! 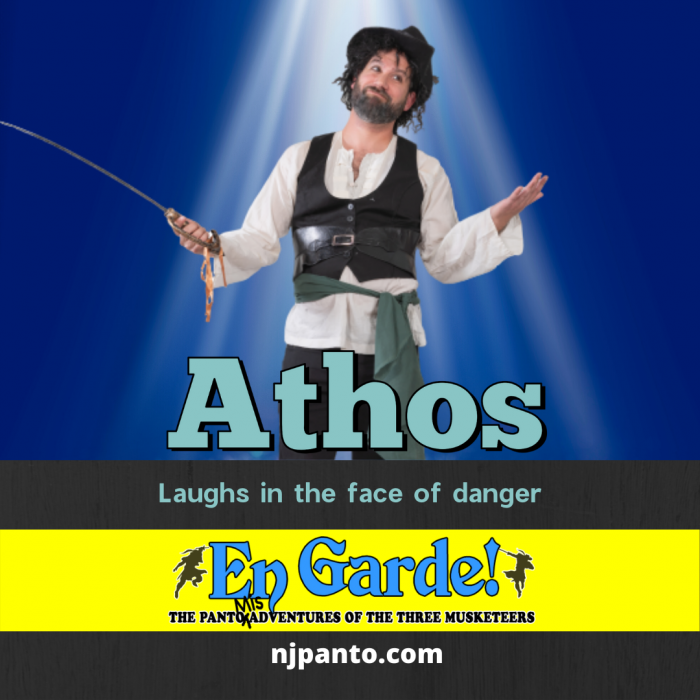 We are so psyched for you to see our show tonight! Go to njpanto.com, use the discount code SURPRISE and you can get $2 off Adult and Child Advance tickets for Friday and Saturday performances! 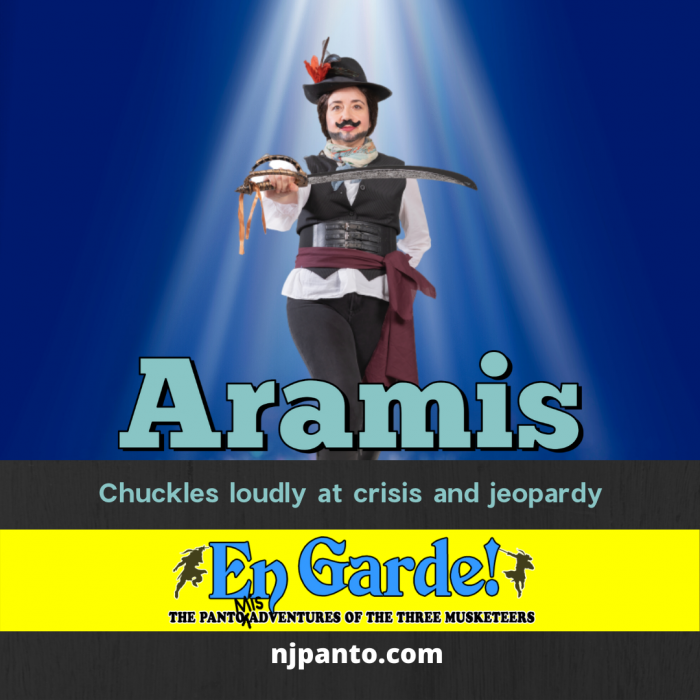 What an extraordinary weekend. Fantastic audiences, great after show party on Saturday, and a ton of fun backstage. So many people telling us this is best and funniest show ever, and I’m more than happy to take that compliment! This cast and crew snail it every show, i couldn’t be more proud of them. One more weekend left to go for the best comedy show in town! Get your tix njpanto.com 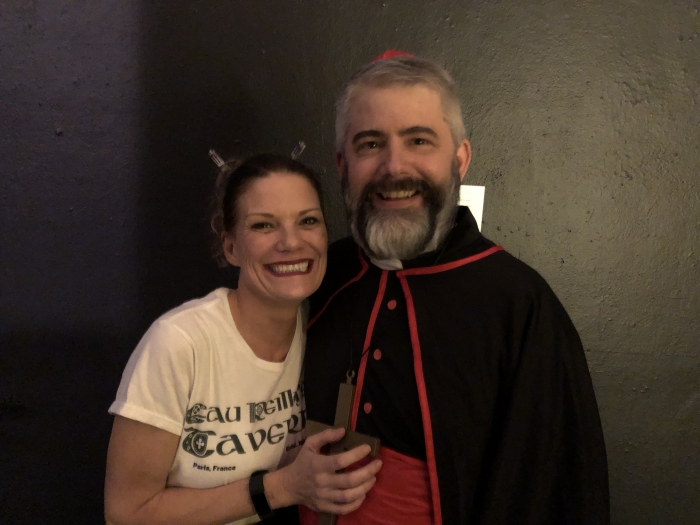 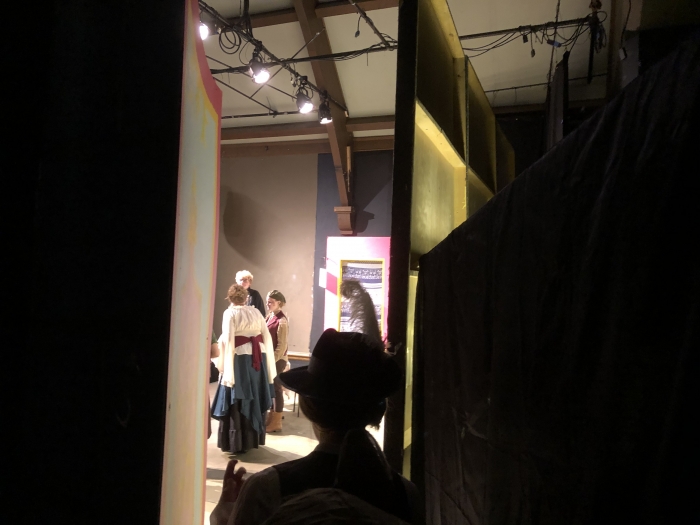 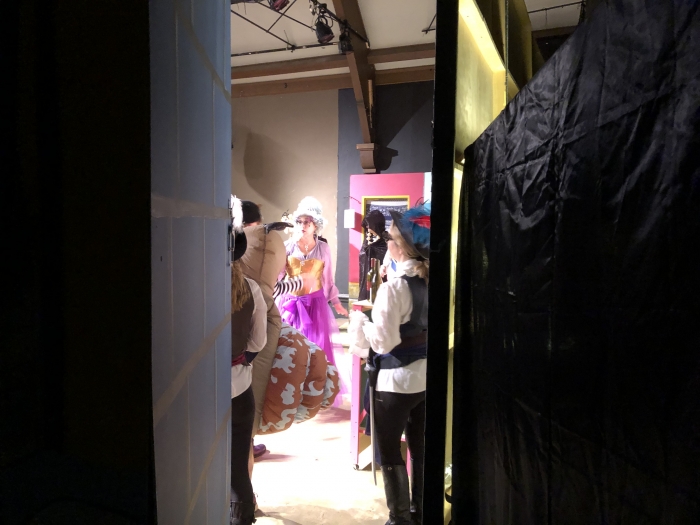 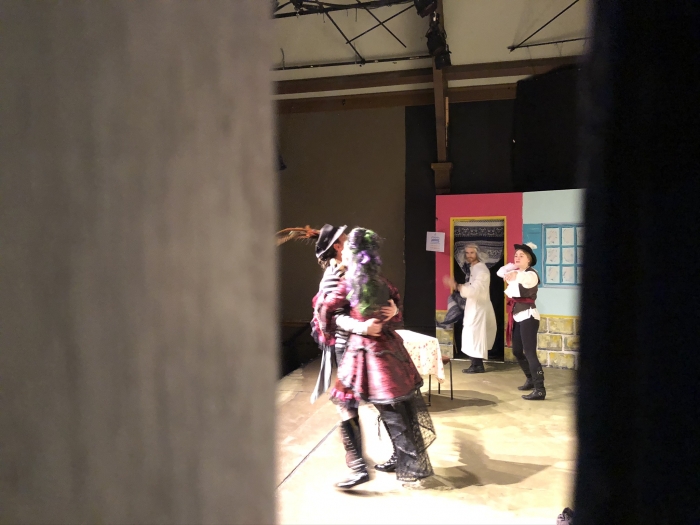 Tickets on sale for now at njpanto.com for our final weekend!

Use the Promo Code SURPRISE and you can get $2 off Adult and Child Advance tickets for Friday and Saturday performances!

This is a crowd-pleaser for the whole family that will have you yelling, laughing, cheering and booing. There's no show like our Maplewood Panto! 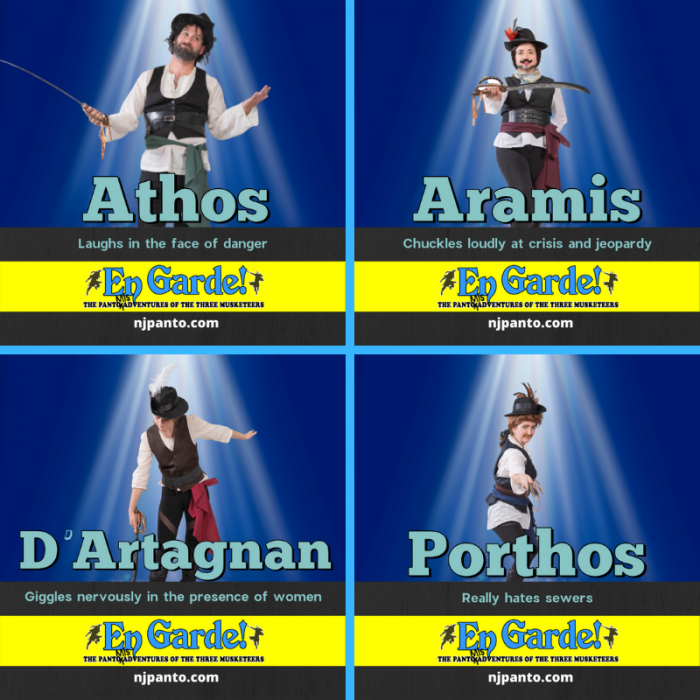 And yet - no pics of the Snail.

I may be forever heartbroken

And yet - no pics of the Snail.  I may be forever heartbroken

Serge is in the trailer, posted Jan. 6.

Someday, maybe, i'll manage to be in NJ for one of these.  They sound absolutely delightful.

Yes, that’s where I fell in love and thought perhaps Daisy’s successor could do with a fan portrait

Oh, bravo everybody, well done! What an excellent production!

We were privileged to see a special screening (thank you!), and it was almost like being there. The jokes, the visual puns, the timing, the songs, audience reactions...just loved this tale.

We made it to the Sunday afternoon show. Great job! My kids wanted to have sword fights all day yesterday, We may have been shouting "En Garde" a bit too loudly for the neighbors' liking.

We were privileged to see a special screening ...

Now that the season is over and we are suffering from Panto withdrawal symptoms, we thought we would take a moment to thank everyone who came to see the show and support local charities. Every audience brought 100% to each show and we hope you had as much fun as we did making you all laugh.

I thought it would be fun to make a little video with some of my highlights of putting this hilarious show together. From bashing out ideas on a whiteboard, through script writing, auditions, casting, production meetings, photo shoots, rehearsals, and set building — we spend around 9 months a year putting a panto together. Here I’ve condensed that into around 2 minutes to one of those jolly stock indie guitar tracks everyone hates.

I really enjoyed watching that, ridski. (And the stock indie guitar track was no more hatefully jolly than anything from Hello Biafra.) Thanks for making and posting it.