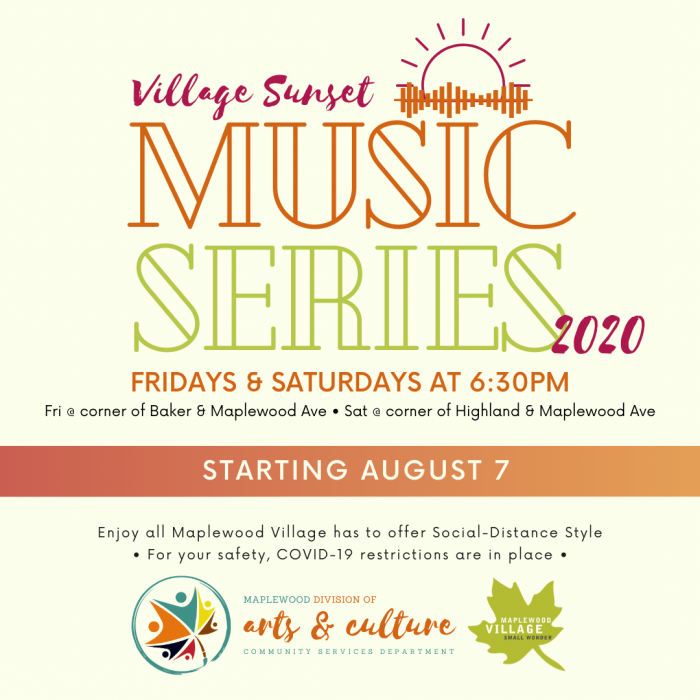 The Village Sunset Music Series has been conceived to be the background sounds to your outdoor dining experience, in our #pedestrianfriendly Maplewood downtown. The Friday and Saturday music series will feature the talent of locally-grown musicians. Maplewood Division of Arts & Culture in collaboration with Maplewood Village Alliance, are injecting much needed energy and rhtythm to the streets of our artsy town.

Come eat and stroll, while enjoying the masks on-socially distanced performance this week!

Music from Jon & Deena features intimate vocal harmonies and charming songs with roots in acoustic folk, catchy indie pop and joyful rock and roll. Their songwriting has been called "direct and artful," by the New York Times, Deena's voice "...incredible: kidstuff and wisdom merged," by the Village Voice. Their songs have been recorded by Jackson Browne, Dar Williams, Marshall Crenshaw and featured in ﬁlms and on network TV.

Jon Fried & Deena Shoshkes began performing in the streets in Paris and Rome. They started a rock band called The Cucumbers and found a home in the indie pop scene in Hoboken, NJ. After many years of playing music together in varied incarnations, their duo performances draw upon a deep songbook and effortless communication.! ! In addition to performing together, Jon and Deena are both members of the highly acclaimed indie super group, The Campﬁre Flies. Deena has released two solo albums, is a co-founder of the Saturday Afternoon Song Swap and a member of the TaikoZoku drumming ensemble. Jon Fried is a prize-winning writer of short ﬁction, which has been published several journals and is working on a set of historical novels based on some of the colorful characters in his family tree.

** Safety measures are in place and Social Distancing Ambassadors will remind you to stay 6 feet apart and wear your masks. We will be following the governor’s outdoor gathering guidelines**