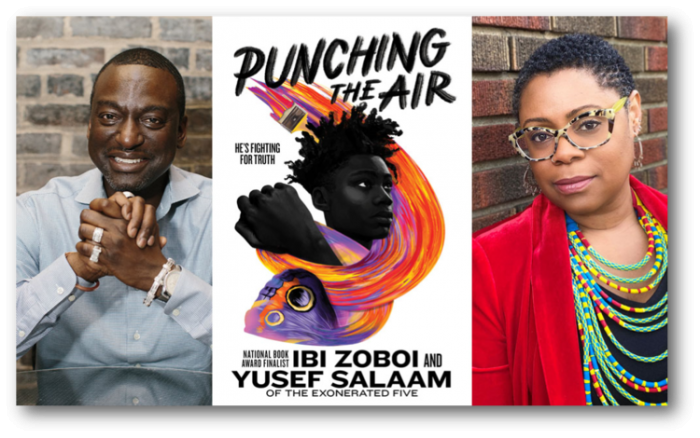 Punching the Air has been described as “a masterwork of humanity,” “a vital story for young readers in a tumultuous time,” and “an unfiltered perspective of the anti-Blackness upholding the U.S. criminal justice system.” The publisher is partnering with nonprofit organizations to donate copies of this book to incarcerated youth.

Dr. Salaam is a poet, motivational speaker, criminal justice reform advocate, and a member of the Exonerated Five. Dr. Salaam was one of five teenagers who were wrongfully incarcerated and became known as the “Central Park Five.” You can find him online at yusefspeaks.com

Ibi Zoboi is the New York Times Bestselling author of My Life as an Ice Cream Sandwich (Penguin, 2019), her middle grade debut, and the Young Adult novels Pride (HaperCollins, 2018) and American Street (HarperCollins, 2017), a National Book Award Finalist and recipient of five starred reviews. She is also the editor of Black Enough:Stories of Being Young & Black in America (HarperCollins, 2019). Ms. Zoboi holds an MFA in Writing for Children & Young Adults from Vermont College of Fine Arts. Her writing has been published in The New York Times Book Review, the Horn Book Magazine, and The Rumpus, among others. As an educator, she is the recipient of several grants from the Brooklyn Arts Council for her community-based programs for teen girls in both Brooklyn and Haiti. She has worked for arts organizations such as Teachers & Writers Collaborative and Community Word Project as a writer-in-residence and teaching artist in New York City public schools.

She lives in Maplewood, New Jersey with her husband and their three children. You can find her online at www.ibizoboi.net.

Dr. Khadijah Costley White is an Assistant Professor in the Department of Journalism and Media Studies in the School of Communication and Information at Rutgers University in New Brunswick. Previously she worked as a journalist on an Emmy-nominated team at NOW on PBS (formerly NOW with Bill Moyers) and a New York City Teaching Fellow. She is the author of The Branding of Right-Wing Activism: The News Media and the Tea Party.

She has published work in numerous scholarly journals and books, and presented her research at conferences and universities around the world. White's writing and commentary on topics such as race, social movements, news, and politics has appeared in Vice, National Public Radio, The Atlantic, The New York Times, The Root and more. In 2007 the National Association of Black Journalists and United Nations awarded her a reporting fellowship to Senegal. She has also received the University of Pennsylvania Women of Color at Penn Award, an Emerging Diversity Scholar citation from the University of Michigan, and served as a White House intern on the Obama administration’s Broadcast Media team. Additionally, she has consulted for the Ken Burns’ film company “Florentine Films” and served the MacArthur Foundation as an external advisor in journalism and media. She received her PhD from the Annenberg School for Communication at the University of Pennsylvania and is a proud Swarthmore College alum.

As an activist and community organizer, White has helped lead community actions against police violence, mobilized concerned citizens via social media, organized events and programs related to racial justice, convened panels, lectures and teach-ins, and spoken at rallies and other community events. She is also a mom of two, Ella and Akin.