From Tarrega To Django: The Art Of Guitar 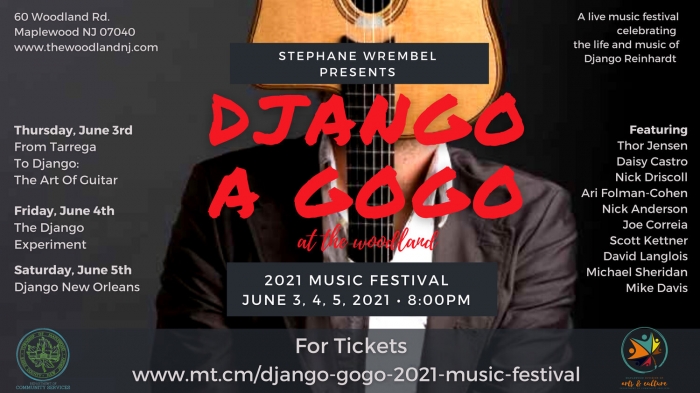 From Tarrega To Django: The Art Of Guitar

Django Reinhardt was not only perhaps the greatest master of Jazz guitar who ever lived, he was also an accomplished composer and classical musician. Classical guitar is totally embedded in his playing. Together Stephane and Michael will present a repertoire including classical guitar pieces by Tarrega, Sor, Albeniz, Sanlucar as well as a collection of Reinhardt’s compositions from Django L’mpressioniste. The concert will end with the traditional Django Gypsy Swing and French Musette repertoire. Be prepared for a journey through the true soul of the guitar!

Stephane Wrembel is one of the preeminent guitarists specialized in the Django Reinhardt style. Born in France and now based in New Jersey, Wrembel is most known for his Grammy Award®-winning composition “Bistro Fada” from the Academy Award®-winning Woody Allen movie "Midnight In Paris." Since 2001, Wrembel has released over a dozen critically acclaimed releases including a series of recordings in tribute to Reinhardt under the nom de plume, The Django Experiment. Wrembel is also the producer of the annual Django A Gogo Festival in Maplewood, New Jersey, and New York City. Since 2003, he has brought together some of the finest musicians in the world equally influenced by Reinhardt to celebrate the Sinti guitar style to perform in prestigious venues such as Carnegie Hall and The Town Hall.

Located in the heart of Maplewood Village, this Georgian Revival style mansion and adjoining auditorium have been a hub for Maplewood's vibrant cultural and civic life for over eight decades. Completed in 1930 as an elegant home for the Maplewood Woman's Club, The Woodland is owned and operated by the Township of Maplewood which is dedicated to its use for cultural, educational and recreational activities that reflect the diverse character of this unique community.