Would you pull your own tooth?

So here's the deal.

I've got a loose tooth. Number 36, I think. It's got a "condition" and has been getting looser over the past year. My dentist knows about it, and the plan was to pull it at some point. What replaces it, if anything, is TBD.

Anyway, it's pretty damn loose. Depending on what I'm eating, sometimes it feels like it almost comes out by itself. I'm pretty sure a firm wiggle or two with my fingers will just pop it out. Or maybe if I ate a caramel.

Dentist is out of the office will Monday.

Has anyone ever pulled their own tooth? The internet seems to advise against it.  But with a tooth this loose, I'm not sure I see it as a big risk.

Or is this weird?

Don't do it.  If it goes wrong, as you said, the dentist is out of the office until Monday...

Don't do it.  If it goes wrong, as you said, the dentist is out of the office until Monday...

This is a big problem.  Do not pull. But, if it were my tooth, I'd be obsessing and wanting to pull it out. I'd keep pushing on it with my tongue. I am having flashbacks to first grade now.

Sounds like you're not quite pulling a tooth but helping it come out, kinda like a 6 y/o losing a "kids" tooth. Keep rocking it with your tongue, loosening the roots, help it along. In a matter of days it will come free and clear. What's a dentist gonna do, sprinkle it with fairy powder and make it all better? The tooth is coming out one way or another. If you feel you need antibiotics or percoset (but why would you?), then see a dentist, otherwise let nature do its thing.

My roots are so deep, doesn’t matter how loose I think think the tooth is, the dentist is always fighting to get all the root out cleanly then I bleed forever until there’s a decent clot in the gum. (Seriously. Took almost a week last time, in early October: I think it was the same tooth on the left and roots were at least as long as the tooth itself)

Besides, if something goes wrong, who will you (or your health insurer) sue??

I did. Made a little noose with a strong piece of thread, looped it around the tooth, tied the other end around my bedroom door knob....then slammed the door.

Not sure I'm ready to go the full Three Stooges yet.

My teeth aren't at all loose but now I can't stop tonguing them.

I'm more cncerned about the underlying condition...Hopefully not infected but if so, you don't want to ignore that. I assume though if there was an infection you'd be in pain and there would be swelling....

Thanks for the concern, but no infection. No pain. Frankly, I'm not exactly sure why it's coming loose - I'm sure my dentist told me at some point, but I forgot. We've been watching it for a couple of years.

I was thinking about that so I looked it up. Turns out dentists number teeth by quadrant. The 36 tooth would be the sixth tooth from the front in the 3rd quadrant, which is the lower left quadrant.

Thanks for the concern, but no infection. No pain. Frankly, I'm not exactly sure why it's coming loose - I'm sure my dentist told me at some point, but I forgot. We've been watching it for a couple of years.

I'd be concerned about potential for dry socket.  And with no dentists working today, I'd wait until Monday if you're going to do it at all.

I was thinking about that so I looked it up. Turns out dentists number teeth by quadrant. The 36 tooth would be the sixth tooth from the front in the 3rd quadrant, which is the lower left quadrant.

I came up with tooth number 36 based on this: 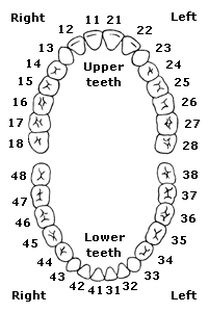 How long have you been going to that dentist for your dental work?  How long ago was your last appointment?  If this is an emergency, the dentist should have someone covering for him/her who can see you.  Some dentists will even give you an emergency appointment for a day/time they are not scheduled to be in the office if condition seems serious enough.  That written, as long as you are not in any pain and the tooth is just loose, not out, I would suggest being careful about what you eat, chewing on the other side of your month, being careful when you brush, and seeing the dentist on Monday.  The problem may be with the gums rather than the tooth. You might need a root canal.  Other teeth may be impacted.  "Pulling" the tooth yourself may not solve the problem and could make things much worse.

I actually just recently switched dentists. Saw the new one in August. I thought my prior dentist was a bit too aggressive when prescribing treatment.

This is not an emergency. No pain. As I said, it's been slowly getting looser over the better part of a year. The new dentist and I talked about what to do with the tooth back in August, though we didn't come to a  decision, other than to pull it when the time came. And other than the inconvenience of a loose tooth, it was not a big concern.

I'm not sure what happened to the tooth in the first place, but for a while, a few years ago, it would get inflamed,  (or the gum anyway) because food would get stuck under  the tooth. Apparently there was a small gap between the tooth and the gum, and you could stick one of those interdental cleaners underneath it to clean it. Anyway, the dentist managed to do that - me, I didn't fare too well with that technique. So when it would get inflamed every now and again, I would rinse with Peridex,a prescription  rinse, and it would calm down after a couple of days.

The only reason it's sort of come to a head recently is that, depending on what I'm eating, it feels like sometimes it's getting pulled put of its socket a bit, and then settles back in. I'm pretty sure if I ate a caramel, it would pop out. (If I was lucky.) I guess the alternative to it popping out cleanly would be that it would only come out partially, leaving me with a disaster.

So yeah, I'm off to the dentist, hopefully next week. I can't imagine this will take more than 5 minutes in the chair.

Have you considered Googling to find a Dentist opened today? Why put up with this? You can still see your regular dentist for follow-up on Monday.

well, I went to my dentist today, and it turns out it wasn't the tooth that was loose - it was the crown. So he pulled the crown off, but was afraid that if he also went for the tooth, it would crumble into pieces, so he recommended I go to a surgeon for the final removal since they're better equipped for dealing with that.

So at the moment I've got a big gap between my molars.

No pain at all, though it's a little weird trying to chew when there's a gap between my teeth.

I empathise! Welcome to the World of Soft Foods!!!

I was just thinking: this would be a good time for you to enjoy good homemade bone-broths, thicker slow-cooked soups and savoury custards etc. Real old-fashioned foods. Yum!

I figure I'd wrap this thread up with my final report.

Went to an oral surgeon today and had what was left of my tooth pulled. The worst part of the visit was the Novocaine.  Once he got started on the pulling, the tooth was out in a few minutes. It was kind of anti-climactic. The tooth had fractured into three pieces. I asked him to show me the pieces and it barely looked like a tooth.

Anyway, not too much pain so far, but he said tomorrow it would probably be pretty sore.

Interesting dental practice. There was an assistant in the room whose only job was to kind of massage my shoulders to keep me calm through the pain. Occasionally she would remind me to breathe. It worked!

So the dentist called at about 7pm to see how I was doing, which I thought was nice. I said I was fine, and it was hardly sore.

He then complimented me on being such a good patient!

I think that's the first time that's ever happened.

Thinking about it, I can see why I'm probably a good dental patient. Once I enter my zen state, I pretty much just sit there, mouth agape, and let them do whatever they want to me. I imagine they get a lot of patients that are a lot more fidgety.

Return to all Discussions
Return to Please Help