Why yes,that is tropical storm forming off Florida. Why do you ask?

Possible effects on MAPSO would be rain and high winds. Likely timing is Tuesday Wednesday. Would be named Arthur.

Still lots of uncertainty over track and intensity, so local effects very hard to predict. 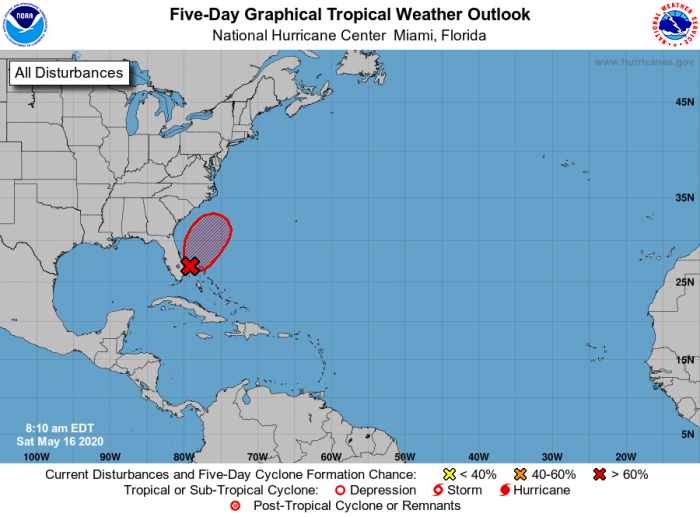 Sunday morning update: Tropical Storm Arthur became the first named storm of the season last night, forming well off the coast of Florida. The models have come into much better alignment on the track through midweek, with the storm heading north to pass off (or over)Cape Hatteras Monday morning and then out to sea. Effects in the MAPSO area in this scenario would be minimal. 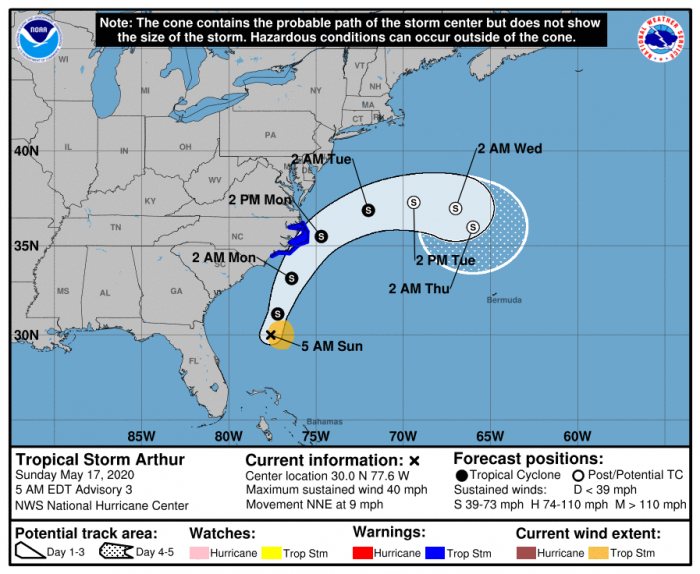 1. As noted in the text above the map, the cone represents the center of the storm, not the areas where hazardous conditions will occur.

2. The "probable path" of the center of the storm means there is some (arbitrarily selected) level of probability that the storm path will be within the cone.

If the cone represented 100% certainty that you covered ALL possible areas for the path of the center of the storm (or, to experience hazardous conditions), what would you see? That cone would become an enormous blob covering a huge amount of area. As most of that area wouldn't experience any storm conditions at all, you are providing many false alarms (one type of error).

On the opposite extreme, if there was only 1% certainty of a path, then a thin line could be presented for one possible path out of many divergent models. Then the risk is that you picked the wrong path, and many areas could experience the center of the storm (and many more areas experience hazardous conditions) that are far away from that line. So, you increase the risk of people thinking they are safe when they are not (another type of error).

The cone represents something between those two extremes.

From a quick google search, a 2011 blog (https://blog.weatherops.com/2011/07/26/hurricane-cone-probability/) indicates that the cone represents about 67% certainty of the path of the center of the storm. This is an arbitrary certainty level, which could be changed. As weather forecasting needs to present information in a way that balances the two types of errors, this 67% standard is to try to accomplish that.

Remember all the people saying a prediction was a 'bust' (false alarm) when a storm ended up just missing our local area? If the cone is enlarged, it would increase the area of a "bust" of the storm prediction. This could lead people to ignore future storm predictions. So, instead of enlarging the cone, weather predictions remind us that hazardous conditions can occur outside of the cone (which is why the text in the black box is there).

To make explicit what Sprout is saying (and what sprout is saying is correct), below is one set of output from one of the models used to forecast storm tracks.  There are several models, and each puts out several sets of data like this, and they do it four times a day.  The cone is an attempt to concretize that information in a way that makes it more useful to the casual observer. 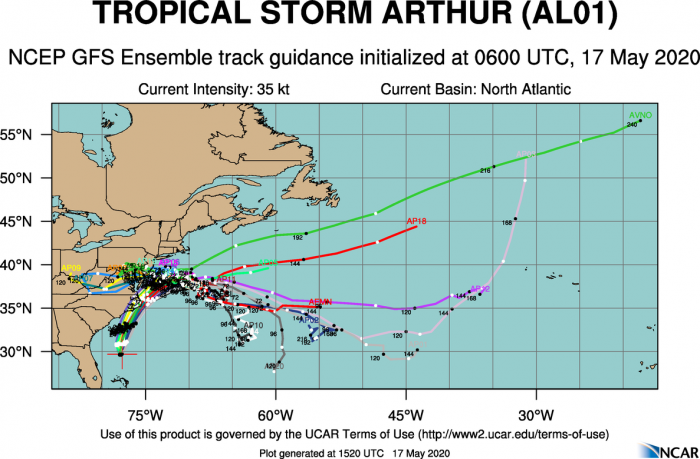 That's fine, but my problem with the cone is that for the casual observer, it looks like it's describing the area that might be affected. Consequently, if they live outside of the cone, they will feel safer, when in fact they shouldn't.

And in my experience watching the TV, the forecasters do not make clear that the cone does not represent the possible hazardous area. It's fine that the qualification appears on the map, but how many people look at weather maps? But, I'll try to pay closer attention to the TV this season and see how they handle it. Maybe I'm missing something.

OK, I'm done with my rant. I just think it's a problem that could be better solved.

Other question - is it odd to have the storm form so close to the coast? Usually they start hundreds of miles from the coast.

To your first issue, that's why there are watches and warnings.  But science is about probabilities, not certainties, and when you are dealing with people who cannot comprehend that concept, there is actually no way to adequately communicate with them.  We have to some extent seen that with both climate change and the covid-19 pandemic, where the lack of certainty has been exploited to sow doubt and raise conspiracy theories.

To your other question, the system formed off the coast of Africa several days ago.  Because it is early in the season I suspect (guessing here as I have no data on this particular storm) that seasonally cooler waters delayed formation until the system moved to its current location.  I am sure there is more to it than that, but the gist is that, no, it is not particularly noteworthy.

Drummerboy I'm with you on not liking the cone.  I've grown to really hate it the longer I work in catastrophe modeling.  The cone doesn't tell you anything about the wind field, the precip intensity/distribution, but even "sophisticated" users of weather data, like insurers, use it to make major decisions that end up biting them.

Thankfully, NHC has started to provide supplemental maps for each named storm regarding wind, rain and even surge.  I'd always recommend looking at those since they aren't beholden to the cone.

The cone is a forecast that is supposed to show the envelope within which the center of the storm will pass, based upon old forecasts. It’s not meant to say anything about hazardous conditions.

Return to all Discussions
Return to Weather and Transit related