Leon Cooperman - another example of a (local) billionaire being a moron. Plus, his new wing at St. Barn sucks.

As for the wing - I just spent 3 days there. It's a waste of space. None of the nurses I asked about it like it. 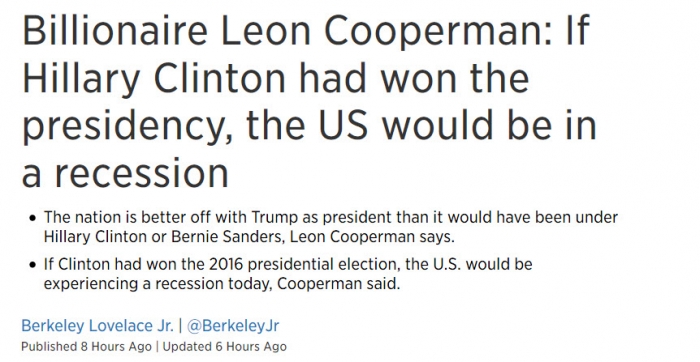 I love it when hedge-fund owners think they are economists. Not the same.

Here's the link , in case you need to read his words of doofus.

Doofuses aside. I  wanna hear more about the new wing, pro & con...

He is giving away most of his money. I actually tangentially know him and he is not your typical master of the universe type prick. He is actually a quite down to earth Bronx boy. He is not a hospital architect.

Mrs. C's sister was in the new wing last week. She loved it - all single rooms.

(get ready for a rant, 'cause I just spent 3 days there)

yes - all single rooms. Which do not contain a convenient wastepaper basket because that would destroy the clean lines of the room. The only ones available require a foot press (not easy to achieve after knee surgery) and are not near the bed. And if you have to get out of bed just to throw away a tissue, you've made a severe design mistake. Patient rooms produce a lot of detritus.

Anyway, instead I threw my crap on the floor.

Bathroom has a sliding door -  not the easiest door to deal with if you're encumbered.

Also the signage sucks, as in, it's mostly missing.  In my wing, not one sign that said Nurse's Station.

I was there for my pre-admittance testing. The route to my eventual destination had several stops and seemed kind of random, and again, hardly any signage.

Needless dead ends in the hallways. Again, not fun to run into as you're taking your walk with your new knee.

It's a sterile, unwelcoming environment if you ask me.

By the way, the things I pointed out are the obvious-to-the-layman problems. I'm sure a good hospital architect would cry at this building.

It's unacceptable to burden generations of patients with a piece of crap. People will need to adapt to the building - not the other way around. Didn't the architect read The Fountainhead, fergawdsakes? No Howard Roark's on this project, I can assure you.

Sure, he's not the only one to blame, but he clearly put no effort into making sure his namesake was a good building, serving the needs of its occupants. It appears putting his name on it was sufficient.

At least he didn't make as big of a mess at the JCC.

p.s. I live across the street. I have to look at it several times a day.

Mrs. C's sister was in the new wing last week. She loved it - all single rooms.

It seems from your ability to rant your surgery went OK. I hope so and wish you a full recovery.

full replacement, robotic. The maker of the knee - Stryker, also makes the robot. (I think) My Dr apparently only uses this system.

And it went very well, thank you. Am recovering nicely. I was the star pupil in the PT class.

Can already flex the knee to 100 degrees (not easily, but still good progress...)

It hurts like hell sometimes - no surprise there of course. They gave me some potent opioids for home, but I'm trying to avoid them. Been taking stuff called Trezix, which seems to do the job sufficiently.

But the pain is different and generally more tolerable than the arthritic pain of before,.

I was able to walk up the 20 steps to my apartment without too much trouble, using a cane. Was actually less painful than pre-surgery. And I spent a good part of Thursday night (my first night home) puttering around with no cane at all. Except to get up though. Always need it to get up. And I've got a walker for outdoor excursions.

And I lied in my rant. I didn't throw my crap on the floor. I carefully collected it as best I could on the available surfaces. I wasn't going to make the staff's job any harder.

Glad that you're doing so well. How large is your incision?  I had total knee replacements in both knees 16 years ago and my incisions are about 12 inches. My doctor is surprised that I'm doing so well after 16 years - at the time that he replaced my knees, he said that the life expectancy was 15-20 years, but could be more. At some stage, I'll probably need revisions and hope that they can be done robotically.

eta - They really have made great strides in knee replacements. I was in St. Barnabas for three days and then in Kessler as an inpatient for 8 -10 days (I don't remember exactly.)  But that was because I had both knees done at the same time. I don't think they do that anymore.

I have a racquetball partner who had both of his knees done at the same time too, but I don't know how recent that was.

I haven't actually seen the whole incision yet, the "unveiling" will be on Tuesday, when I get to take the dressing off, unless it falls off before then. It looks to be about 8 inches. Plus there are two small incisions above and below the main one for robotic sensors.

I don't have to do any inpatient rehab. I'm getting some in-home PT for a few weeks (had my first one today), then I'm off to out-patient PT.

Good to hear - hope you have a quick and uneventful recovery.

Will it just be the one knee or is the other one next?

My left knee is in good shape, so nothing on the horizon there. The arthritis in my right knee was exacerbated by a minor injury about 18 months ago, followed by what I think may have been a botched arthroscopic meniscus repair (almost a year ago to the day), followed by a year of steady deterioration.

My left hip is starting to fade though, but no plans for surgery at this time.

I just spent 2 visits there, over the past two months, in the second floor cancer ward.

i loved it. the place is quiet at night, and the lights dim during the day "at rest time". The rooms have almost floor to ceiling windows, which lets in a lot of natural light. I spent weeks there, the natural light made it less cave like. the room has a couch which folds to a bed to accommodate overnight family member.There is a bunch of private seating areas outside of the rooms, very nice. the bathroom with sliding door i thought was terrific. It was so new; the hot water had not been tested. five plumbers and engineers got hot water running.I had great showers.The nurses were very kind and wonderful to me. They seemed very happy with the new wing.they call it the Marriott.