For Seniors, caretakers ... and surviving as widows

Here’s is a bit more — Jamie disapproves of lengthy copy and paste..

“Such clashes, and related reports of stubbornness, increase when the parent and child live together, she found. Perceived stubbornness also rises when a parent’s disability increases.

“When a child steps in, most commonly there’s a safety issue,” Dr. Heid said. “The parent may not share those feelings about their capabilities.”

These familiar, probably universal, safety-versus-autonomy debates have led some critics to object that adult children overemphasize the former, when what matters more to their parents is maintaining independence and pursuing what they find meaningful.

When parents feel thwarted, does resistance really constitute stubbornness? Perhaps their children, who in these studies were not serving as hands-on caregivers, were domineering or intrusive.

Stubbornness might actually be a positive trait, Dr. Heid suggested. It shows tenacity, persistence, a sense of control.

But stubbornness, it turns out, can also have hurtful consequences. In Dr. Heid’s largest study, involving nearly 400 middle-aged children, the most common response was avoidance: Children back off and let the contested issue go.

“But when they do, they report more depressive symptoms and less positive relationships,” Dr. Heid said. “They may be internalizing their distress.”

Arguing with one’s parents has similarly unhappy outcomes. What helps, the study shows, is reasoning. “It allows for a more open exchange of views and more discussion,” Dr. Heid said.

Reasoning with someone who seems impervious to it sounds, well, challenging. “It’s a really hard thing, this mismatch between what we need and what we want and what’s good for us,” said Marci Gleason, a social psychologist at the University of Texas at Austin.

Social scientists have learned that older adults who provide support have increased well-being and better health. Receiving help, on the other hand, is associated with negative mood.

See, this suggests the relationships are either about dependency/rescuing; or almost forcing ‘safety’ on an elder, or having infrequent contact if they won’t agree to your terms...because ‘life’s so busy’. I’m not so sure it needs to be either.

Lots of my families have worked out a happy medium where the elder will accept some support (for cleaning, or shopping/medical visits, etc), installed some different alarms and the contact schedule changes. And the content of their conversation changes, too, with a lot of the tensions dropped. Kinda reminds people why they love each other

Well, I don’t recall reading a Times article this month, but it won’t let me past the paywall.

I’d really like to know what the objection is, to the urine testing because it’s a critical part of female health care, and elder health care. UTIs can affect not only gut health and balance but also cognition. There are some simple ways to overcome infection that don’t require antibiotics (and washing your hands in warm soapy water while singing Happy Birthday is one of them), but sometimes you really need that extra help.

It’s such a common routine in a doctor’s office or clinic or hospital that patients tend to comply without thinking: Step on the scale, roll up your sleeve for the blood pressure cuff, urinate into a cup.

But that last request should prompt questions, at the least. The urine test is the first step into what’s sometimes called “the culture of culturing.”

In patients who have none of the typical symptoms of a urinary tract infection — no painful or frequent urination, no blood in the urine, no fever or lower abdominal tenderness — lab results detecting bacteria in the urine don’t indicate infection and thus shouldn’t trigger treatment.

Older people, and nursing home residents in particular, often have urinary systems colonized by bacteria; they will have a positive urine test almost every time, but they’re not sick.

Yet such test results, signifying what’s known in doctor-talk as asymptomatic bacteriuria, frequently lead to unnecessary treatment with antibiotics. Public health leaders and researchers have battled for years to persuade providers to stop reaching for their prescription pads every time a urine test comes back positive.

They have been only modestly successful. A recent study in 46 Michigan hospitals, for instance, found that of 2,733 patients with asymptomatic bacteriuria (average age: 77), almost 83 percent received a full course of antibiotics. The odds of this overtreatment rose 10 percent with each decade of age.

“We now recognize that there’s a strong cognitive bias,” said Dr. Christine Soong, head of hospital medicine at Sinai Health System in Toronto and co-author of a recent editorial on the subject in JAMA Internal Medicine. “Once a clinician sees bacteria in the urine, the reflex is, you can’t ignore it. You want to treat it.”

Now, the campaign has changed from trying to prevent needless treatment to trying to curtail the testing that prompts it. If concerned doctors can’t dissuade their colleagues from treating these non-infections, they’re trying to discourage them from ordering urine tests in the first place.

The very reserved headline on Dr. Soong’s editorial was: “De-adoption of Routine Urine Culture Testing — A Call to Action.” It probably should have been: “For Crying Out Loud, Stop With the Pee in the Cup.” 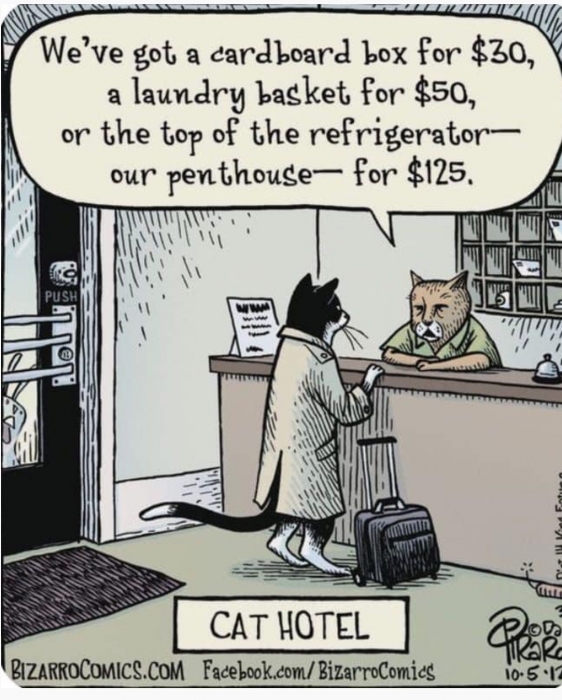 Thank you for posting that article.
i think I’d worry if my GP just ‘routinely’ requested a battery of tests like that.... there’s an annual cycle, sure, and maybe an infection might be detected while those tests are performed. Otherwise we only do tests in response to signs and symptoms.

That cartoon is cute

Today’s Times article hit home with me. Since my husband of almost 64 years died last year, I have managed well in some areas, but interest in food ended. Even as friends and family invite me to lunches and dinners, the food presented before me is mostly packed up in doggy bags to be eaten at home — or tossed. Lighting the stove is way too much effort. Microwave meals, while fulfilling the purpose, are either gross or just unappealing.

I have lost weight, but not in a good way. Supplements abound in my pantry!

After reading this, I see my behavior as yet another grief process. Thanksgiving Day food consumption looms ahead!

Joanne, does this Link work for you?

Return to all Discussions
Return to Seniors Issues