Find out more about the Stars and Stripes, and NJ's part in the Story, on June 5 at Durand-Hedden

The Histories of the American Flag & New Jersey’s Annin Flagmakers

Find out more about the Stars & Stripes, and NJ’s part in the story, on June 5 at Durand-Hedden

MAPLEWOOD, NJ – June 2016 – The American Flag carries great meaning, at home and throughout the world. The oldest and largest flag company in the United States, the Annin Flagmakers, which dates back to 1847, has its headquarters in Roseland, New Jersey. It is known for its custom hand sewn (versus printed) flags and not only produces the American flag, but those of the 50 States, as well as of most of the countries overseas.

At 2:00 p.m. on Sunday, June 5, in honor of Flag Day, Joe Vallone, the retired manager of the Annin plant in Verona, will speak on the histories of the American flag and of the Annin Flagmakers, and describe how the flag is produced. Flag Day (June 14) is a commemoration of the adoption of the U.S. flag by resolution of the Second Continental Congress in 1777. Mr. Vallone will give out flags and literature as part of his presentation on the 5th.

Also on June 5, from 1:00 – 4:00 p.m. visitors can catch the exhibit, From Farm to Suburb: The Birth of College Hill, which explores the evolution of a section of Maplewood from a dairy farm to a popular neighborhood of 300 houses. Out in the carriage house the Country Store will be selling historic-themed treasures: early American children’s games, books and toys, facsimile documents, quill pens and ink, historic cook books, cookie molds, tin lanterns, reproduction decorative ceramics, vintage photos, hiking sticks and more. The hard-to-find original Doors of Maplewood poster and Smile, the history of Olympic Park, will also be available.  At 4:15 p.m. there will be a brief Annual Meeting for Durand-Hedden House and Garden Association members.

Durand-Hedden House is dedicated to telling the history of the development of Maplewood and the surrounding area in new and engaging ways. It is located in Grasmere Park at 523 Ridgewood Road in Maplewood. The Country Store features unique books, maps, and gifts of historical interest, and is open on weekends from noon to 5:00pm. For more information or to arrange group tours call 973-763-7712. You can also visit our website at durandhedden.org and find us on Facebook and Twitter. 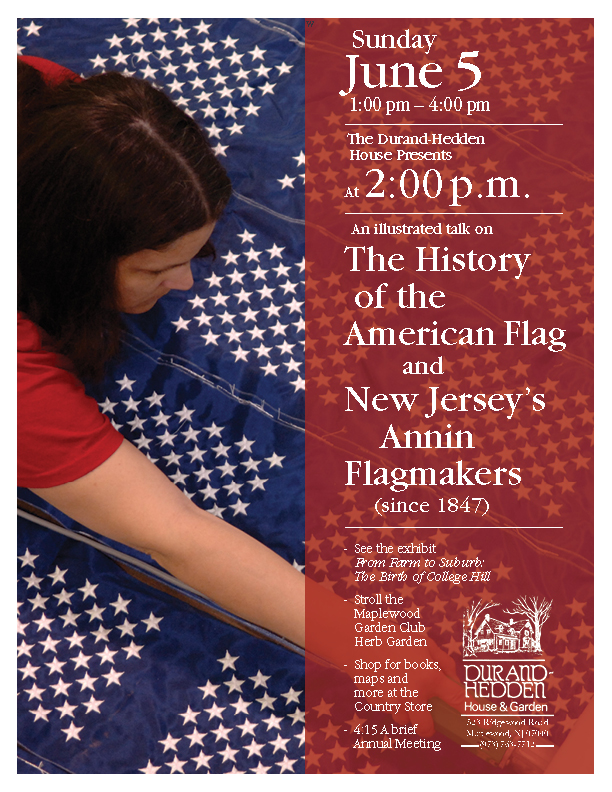