The animal world — and the human connection

Good grief, what could be offensive in this -- considering troops are groups of apes and Eagle Scout rank is the ultimate goal in scouting. Madonna is, IMHO, well past her sell by date.

"Looking for love in New York is not for the meek. “If it’s a young male gorilla that was raised in a very small troop, bringing him to the Bronx, where he’s going to be exposed to four or five adult females, might not be in his best interest,” Dr. Thomas said. “You wouldn’t want to introduce a sexually naïve male that hasn’t had a lot of experience with courtship behavior.” (The human equivalent would be trying to match up an Eagle Scout with Madonna.)"

FYI, I am the proud mother of an Eagle Scout!

I am thinking SAC saw something in that reference that we missed, or took a different angle on it. But I can't figure it out.

Sad, but the story reveals the kindness and dedication of those caring for mistreated and abused dogs...

News about our feathered friends...

As well they should. Australia's native fauna are completely vulnerable to predators such as cats.

It's old news here; we've known about this well, for years really but this latest announcement is a couple of weeks old at least. What annoys me is that feral dogs and goats are a bigger problem, and they never get publicity even in rural press unless a dog attacks livestock (and then it's usually attributed to a fox).

What people in cities and outside Australia don't realise is that these animals aren't native to here, they have no natural place in our ecology and nothing -literally nothing - that can control them. Unlike rabbits, which were also introduced by the First Fleet and have ruined whole swathes of subsoil, we don't have any real plans for dealing with the damage caused to native fauna and flora by the packs, herds and prides of these introduced species.

Now rabbits: you love the critters, we hate them. It was realised very early that bringing them was a mistake but we couldn't control/eradicate them. So they introduced foxes. A bigger mistake, and meantime the rabbits continued to destroy natural environment and displace native animals. So they introduced biological controls: diseases that spread to native animals (myxomatosis, etc), something that needed the prickly pear cactus to grow in (the cactus became a noxious weed choking out native plants), and cane toads to eat that beetle (nothing kills cane toads, they're poisonous to everything and have spread to all parts of Australia, killing off native frogs, birds and fish). Rabbits are still ruining farm land, and suburban gardens, and spreading myxo and chlamydia to koalas, etc.

So yeah, even cat lovers here see the need to control plague levels of feral introduced species. (How do people propose we track, capture and neuter ferals when most of them live beyond cities? When they're night stalkers, so hard to see in the bush and the desert? When we don't have sufficient vets in appropriate locations for rural towns let alone national parks and crown lands? There are at least as many feral felines as there are human citizens; feral camels and goats number in the millions; we no longer speak of brumbies glowingly but of wild horses as pests...)

This article gives an idea of the costs to our economy that feral introduced species burden us with:

When you have major government projects such as the ones linked below (from 2010), then you know the problem is seriously impacting most aspects of modern life and a stable economy:

As well they should. Australia's native fauna are completely vulnerable to predators such as cats.

Interesting article on dogs being trained and used to protect and save a dwindling penguin population!

Two nights ago, a fox broke into Melbourne Zoo and killed 14penguins.

Marksierra could tell us more, if you're interested. I'm just heartbroken.

Unfortunately, over the intervening 24 hours, that part of Victoria has also had some of the worst weather in 100 years (acc to a friend), with 3tornadoes and fierce storms and winds, flash flooding parts of the city, and surrounding towns. my friends' neighbour's were trying to bail water from their house in inner Melbourne at almost-midnight...

Melbourne Zoo is, for the the most part, one where the people are fenced away from the animals. So damage to the habitats will be extensive and expensive.

PeggyC said:
Why insulting? All the author was implying was youth and sexual inexperience. Or are you more concerned that it's an insult to Madonna, who embodies the mature-and-sexually-experienced side of the equation in that metaphor??? I thought it was mildly funny.

No, it's an insult to Boy Scouts/Eagle Scouts, implying that they are more naive and inexperienced than other young men. If it was just about youth, they could have just said '16-year-old boy' or similar.

Hard working dogs, but no Bologna!

Back in Central Park...

Mama and backup to the rescue...

Nice to start the New Year with a laugh... 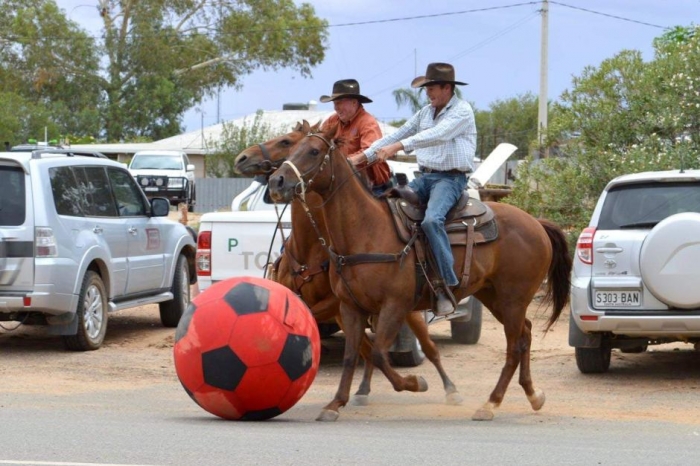 beautiful tribute for a hard-working firedog..

how about a raw fish and a side of fries? Hungry seal pup makes its way to a booth in California! 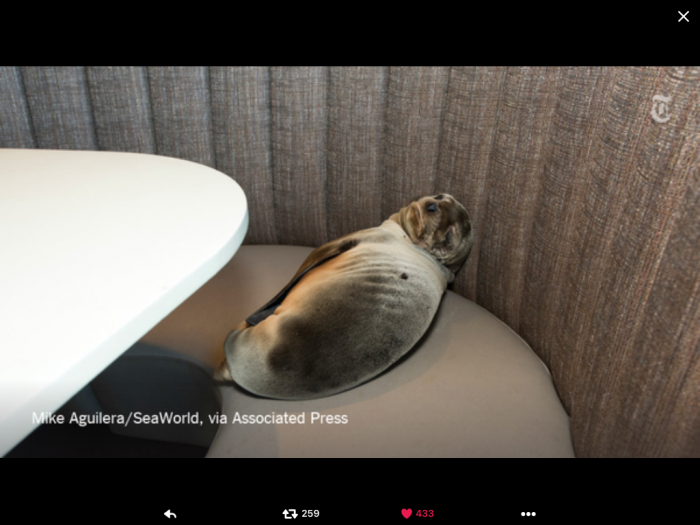 not being a Facebooker, I'm not allowed to see that.

It may relate to this Valentines Day story...

no, this is a frustrated female elephant picking up refuse  in the compound -- and then putting it in a trash can!

The story of A cat in Brooklyn...